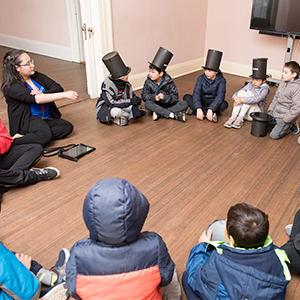 In 1862, after his first year of presidency, President Abraham Lincoln and his family moved to a serene cottage surrounded by lush trees and wooded areas roughly three miles from the White House. From the outside, one could assume the stay was meant to be a pleasure retreat, though historical accounts reveal more complex issues. The Lincoln family lived in the Cottage from roughly June-November of 1862-64. In total, he spent one quarter of his presidency there.

In 2000, President Bill Clinton declared the Cottage a National Monument and the National Trust for Historic Preservation began an 8-year restoration project to bring it back to life. The restored cottage opened to the public in 2008. Today, President Lincoln’s Cottage is a place of reflection for children and adults, just as it was for Lincoln and his family. President Lincoln’s Cottage is located on the grounds of the Armed Forces Retirement Home campus in the Petworth neighborhood of Washington, D.C.

According to its website, President Lincoln’s Cottage is “a home for brave ideas” that inspires visitors to open their minds to all possibilities, listen to other viewpoints and come up with new ways to honor the human spirit – all hallmarks of Lincoln’s presidency.

Visitor services manager Michelle Martz says, President Lincoln’s Cottage’s educational philosophy focuses on social and emotional learning. “The stories of what happened here historically have the power to bring out the leader in any person today,” she notes.

The ongoing threat of the Civil War, with its terrorizing bloodshed and the discord regarding the legality of slavery, followed Lincoln everywhere he went, causing him to ponder deeply, grieve and carefully consider the issues of the day during his stay at the cottage. It is these reflections that today inspire visitors to have “courageous ideas, respectful dialogue and thoughtful compromise.”

Emphasizing President Lincoln’s Cottage as a place of reflection to encourage people to nurture their brave ideas, the staff piloted Social Studies, a program for early learners, ages 2-5, offering several sessions earlier in 2019. After furthering their research on the ways in which Lincoln managed his emotions during his stay at the Cottage and engaging program participants with targeted feedback on previous programming, the staff modified the Social Studies program and is debuting a new session beginning on December 10.

In the new Social Studies program, museum staff will guide children ages 2-5 and their caretakers on a mission to nurture the children’s social and emotional learning skills “through interactive storytelling and hands-on lessons that help foster self-awareness, self-management, relationships and responsible decision-making skills,” as noted in official literature.

Throughout Lincoln’s presidency, many people doubted his leadership and ability to end the Civil War. Lincoln, like many of us, knew what it felt like to fail, but he also knew that when you are passionate about something, you have to get back up and try again.

The staff honed in on Lincoln’s emotional triumph over people’s doubts and chose “Maybe: A Story About the Endless Potential in All of Us,” a children’s book by New York Times best-selling author Kobi Yamada as the focal point for the social studies programming for 2-5-year-old children.

The social studies program includes an interactive story time and an endearing craft that symbolizes a child’s “unique potential to change the world.” The staff hopes to honor Lincoln’s empathy of people from different walks of life and encourage children in their “understanding and managing [of] emotions, setting and achieving positive goals, feeling and showing empathy, establishing and maintaining positive relationships and making responsible decisions.”

Social Studies is an umbrella program with additional offerings for families with older children that will be launched later in the spring of 2020. These programs will engage families through innovative games designed to spark meaningful conversations and ask thoughtful questions on difficult topics.

President Lincoln’s Cottage offers daily tours and is closed on major holidays. Check-in begins at the Robert H. Smith Visitor Education Center, which is housed in a separate building and offers permanent and temporary exhibits on President Lincoln, slavery, the Civil War and the Soldiers’ Home. Visitors may also purchase grounds passes, which give greater walking access to the historic grounds.