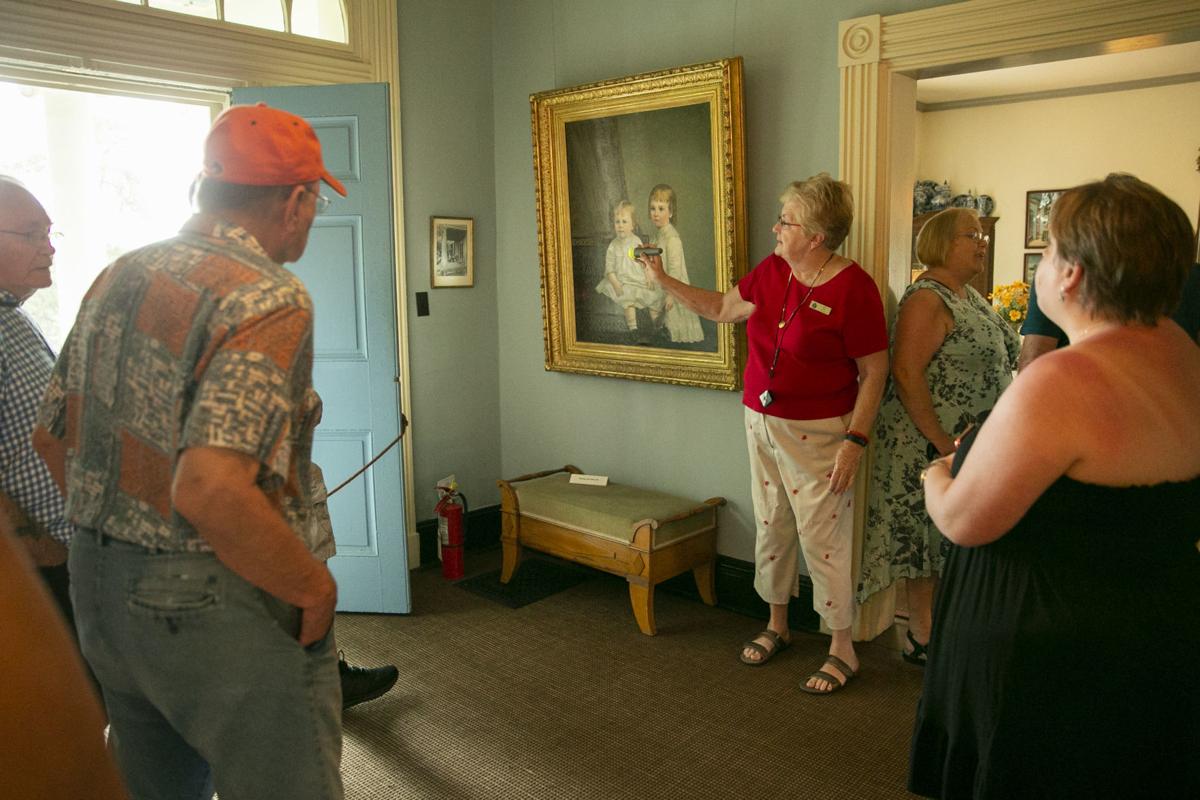 At one point during the new tour of Belmont, the Falmouth home of American Impressionist artist Gari Melchers and his wife, Corinne, visitors hear the sound of a bell ringing.

It’s a recording of the real servant’s bell that rings in the kitchen of the historic house, and it’s the tour guide’s cue to tell visitors about the servants whose work allowed Gari and Corinne Melchers to live their lives the way they did, said Michelle Crow–Dolby, education and communications manager at Belmont.

“The sound of the bell is loud so you can’t ignore it,” Crow–Dolby said. “We use it to talk about the servants who lived here and we give their names.”

There was Sarah Lucas, the cook who resided at Belmont with her son, Archie, and the caretaker, Mason Dillon. Lucas and her son were African Americans.

Tour guides can also show guests a picture of little Archie playing with the Melchers’ nephew. Gari Melchers painted Mason Dillon on several occasions, but there are no pictures of Sarah Lucas.

“I would love to find one,” Crow–Dolby said.

These details about the Belmont servants are part of a new tour at the historic house, which—along with Melchers’ studio on the property—is owned by the state of Virginia and operated by the University of Mary Washington.

Crow–Dolby said she essentially “tore apart” the old house tour, which had remained unchanged for 25 years, and put it back together over the course of a year, with the goal of giving visitors a better understanding of what daily life was like for the people who lived at Belmont, which in addition to being a home and artist’s studio was a “gentleman’s farm.”

“My goal throughout this process was to create a more guest-driven, interactive, exploratory, sensory-rich experience,” Crow–Dolby wrote in a blog post about the new tour, which débuted in July. “We, in the words of Frank Vagnone, author of ‘Anarchist’s Guide to Historic House Museums,’ ‘Tell a story without someone telling the story for them.’ ”

Visitors are no longer fed important dates in Gari and Corinne’s life, architectural details about the house or the titles of the paintings the couple collected throughout their lives.

Instead, an audio track of ambient sounds that Belmont’s residents would have heard throughout the day—the grandfather clock in the entry hall ticking, dogs barking, cows mooing—underlies the tour.

Guests are first escorted to the back door of the house, which opens onto a porch overlooking a field and the Rappahannock River—a view which has remained practically unchanged in a century and which was inspirational to Melchers.

Visitors hear a quote from Melchers about returning home from his New York studio and moving through the house in the exact same way they just did:

“On my return to Fredericksburg, I walked through the house and opening the back door, looked down the hill across the fields and the river. The beauty of Virginia made me wonder how I could have ever left it even for a winter.”

After that, guides introduce visitors to each room and “then we just try not to talk,” Crow–Dolby said.

The idea is that guests will ask questions about the objects that interest them in each room. If nothing is forthcoming, guides have open-ended questions they can ask, such as, “What can we tell about the Melcherses from this room?” or “What catches your eye?”

“And I think [the new tour] tells a better story, more about [Gari and Corinne Melchers’] lives here.”

Crow–Dolby said historic houses in general are becoming “more adventurous” in how they are interpreted for the public.

She drew some of her inspiration for the new tour at the Gari Melchers Home from President Lincoln’s Cottage in northwest Washington, where the lack of much in the way of furniture or collections means the tour is based on helping visitors use their imaginations to populate the empty rooms.

The cottage also makes use of recorded quotes, but Crow–Dolby said the use of sound effects throughout a tour isn’t commonplace.
Scott Harris, executive director of the UMW museums, said this puts the Gari Melchers Home “on the cutting edge” of historic house tours.

Crow–Dolby said other historic houses have asked her how they can replicate the tour at their own sites. And she said the new house tour is getting positive feedback.

“The docents say they’re enjoying it because they get to know their guests better,” she said. “And people are talking more about the house tour on the feedback forms. It’s just much more accessible.”