DCist: The Smithsonian Museums And National Zoo Are Now Closed Thanks To The Shutdown 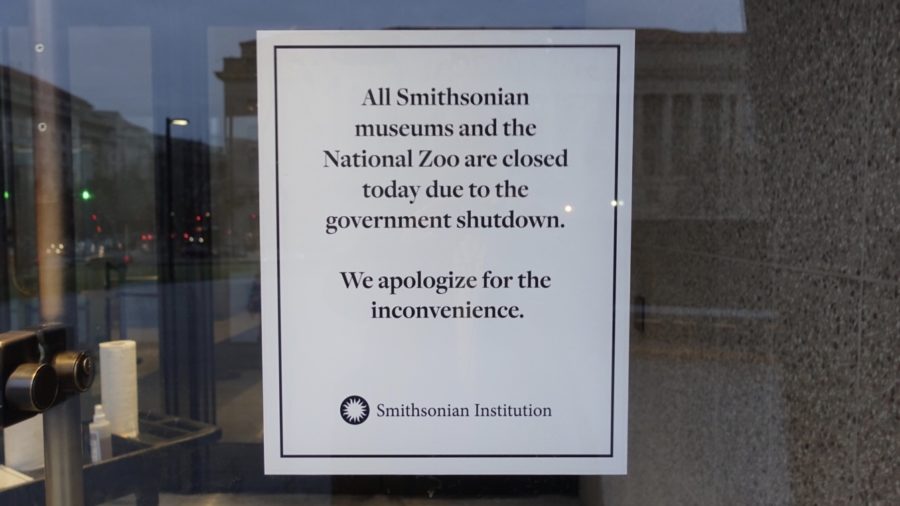 With the partial government shutdown still in effect, a number of D.C. sites that managed to stay open using last year’s funding have now barred their gates to the public.

All of the Smithsonian Institution’s museums and the National Zoo are now closed, with signs apologizing to visitors for the inconvenience.

“Wednesday morning, people are supposed to come in for what they call an orderly shutdown, gather up your materials and turn off your computer, etcetera,” Linda St. Thomas, a spokesperson for the Smithsonian, told DCist last week.

Meanwhile, the National Gallery of Art will shutter on January 3, according to spokesperson Isabella Bulkeley. The National Gallery, which is not affiliated with the Smithsonian, also operates the ice skating rink in its sculpture garden. That, too, will close on Thursday, unless the funding impasse comes to an end.

The Smithsonian, National Zoo, and National Gallery had been able to use past-year funds to keep serving visitors. But now they’ve joined the long list of sites that have been affected by the shutdown.

“For us, it’s really disappointing for our public because we know so many people come to Washington with plans to visit the Smithsonian museums, which are free, and they really plan on that being a part of their visit to the city,” St. Thomas says.

Here’s the current status of some of the D.C. area’s biggest attractions (see here for a more comprehensive list of what is open and closed).

Historic sites: Around the region, a number of monuments and homes operated by the National Park Service have closed their doors. That includes the Belmont-Paul Women’s Equality National Monument, Carter G. Woodson Home, Clara Barton National Historic Site, and the Frederick Douglass National Historic Site. Ford’s Theatre is closed, too, but theater performances have continued as scheduled.

Kennedy Center: All performances are going on as scheduled, but the building’s public hours have been curtailed.

National Arboretum: Closed (it is operated by the Department of Agriculture).

National Building Museum: It has national in the name, but the Building Museum is actually run by a private non-profit. Not only is it still open throughout the shutdown, they are giving free admission (normally $10) to federal employees.

National Parks: Kenilworth Aquatic Gardens in Northeast are closed, while open-air attractions remain accessible. But there are no rangers, visitor services, or public bathrooms (though there are some port-a-potties on the National Mall), and trash has been piling up in some places.

National Zoo: The animals will be cared for, but the zoo is now closed to visitors. Because operators of panda and naked mole rat cams aren’t considered essential, you won’t be able to get a digital fix either. It had stayed open until Jan. 1 using prior-year funds.

Smithsonians: The Air and Space Museum, the Museum of African American History and Culture, the Museum of Natural History, the Portrait Gallery, and the rest of the Smithsonian museums are now closed. They had stayed open until Jan. 1 using prior-year funds.

Spy Museum: Ok, this has nothing to do with the shutdown, but the espionage-themed attraction will close on January 2 to prepare for its move to a new location in L’Enfant Plaza.

Woodrow Wilson House and Lincoln’s Cottage: Run by a private non-profit, both these homes of former presidents have remained open during the shutdown. And they are offering free admission to federal workers, to boot.